Beer. Ohhhh how I miss you. This past weekend I was at my old ‘local’ liquor store and decided to peruse the gluten free beer section. Just shy of two years ago when I went gluten free, there were limited choices that ranged from awful to decent, but nothing that was too reminiscent of BEER. It was more of a cross between a bitter IPA and sake. Some of it really wasn’t bad, but none of it was drink-in-the-sun-out-of-a-solo-cup beer.

I’ve tried them all. Some are great, some are… well, after you try them you may reconsider whether getting boozed up is worth it.

Glutenberg is my most recent discovery, and easily one of the best I’ve found. I grabbed a 4 pack of the blonde and was super excited about finding something in a can. It’s funny, when all you drank was crappy beer in college, finally being able to afford something in a bottle was a big deal. Since the good ol’ Bud Light standby has been taken from me, all I’ve wanted was something in a can. The price was $10ish for a 4 pack – not bad for a microbrew of any sort, but particularly favorable for the price on gluten free anything.

I also love that they’re 16oz pounders. What’s not to like about that? 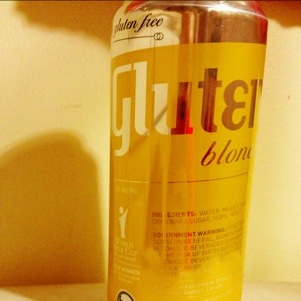 It has a great, light color and there was something reminiscent of a light beer from the smell. Is there a beer god? And has He sent me something acceptable for tailgating and beer pong again?

He has. It’s light, refreshing and somewhat nondescript, which is the best compliment I could give it. It’s something that you could drink several of without feeling full or hopped out. I’m pretty psyched to have it in the cooler this concert season.