Maybe it’s silly to be as excited as I’ve been, but when your favorite food is taken away from you one June day in 2011, without any mercy or chance for goodbye, you miss it. You crave it. You dream about it.

My food was Goldfish crackers.

Imagine my joy when I saw these…

And then turned them around to find this!

Now, I first found out about these from Max & Sophie’s Campaign for Gluten Free Goldfish on Facebook. I had just landed in Reykjavik, Iceland when I saw the update. I knew I couldn’t get them there (you can hardly get an apple) so what did I do? From a hotel in Iceland I logged on to Amazon and bought them to arrive before I returned home. Knowing they would be here made leaving the amazing vacation just slightly easier.

The fish are about about 50% larger than the silhouette of your average goldfish cracker since they’re actually a “puff”. 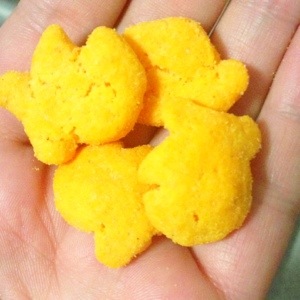 The verdict? They’re pretty good. Definitely a step in the right direction for the gluten free snack food industry. Essentially they’re a fish shaped Cheeto with the seasoning powder of Flavor Blasted Goldfish. Nothing wrong with that.

Ingredients and nutrition? They’re about as healthy as a Cheetos. That’s not the point. They delicious and crunchy and cheesy. They make me happy.  And they also come in buffalo flavor. 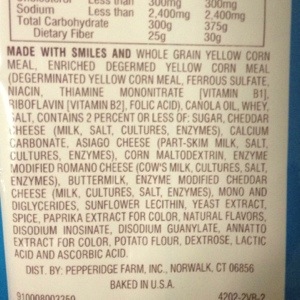 Oh, and they’re the same price as normal kid snack food. The roommate found them at the supermarket 2/$5.00. That in itself is a victory.